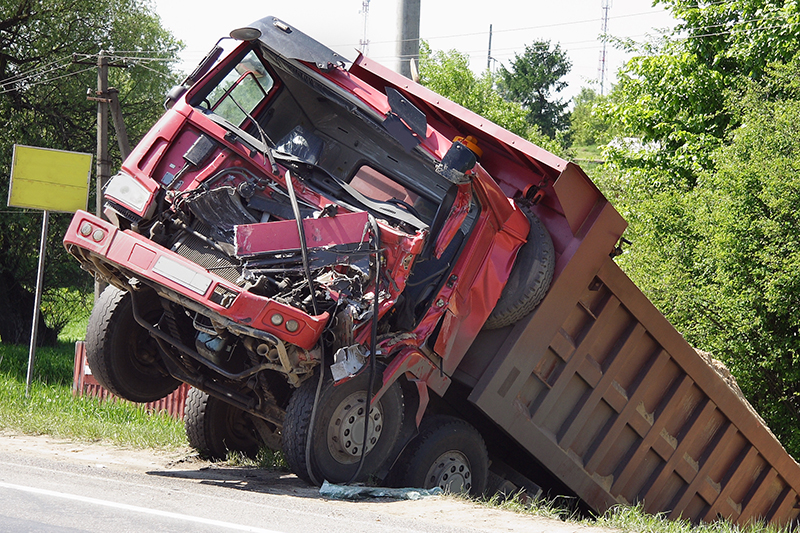 Federal weight limits for trucks vary depending on the number of axels on the truck.  Federal bridge law permits up to 20,000 on a single axle but up to 34,000 pounds on two consecutive axels that are spaced 8 feet or fewer apart.  Certain dump trucks, known as super dumps, have a trailing axel that when deployed can permit certain dump trucks to operate at the maximum gross vehicle weight of 80,000 pounds.  The trailing axel is often deployed more than 10 feet behind the truck.  The trailing axel is this far behind the dump truck so that a heavier load can be spread over a larger roadway surface.

Driver’s manuals for dump trucks addresses the variable handling, acceleration, and maneuverability, and breaking that depends on the load.  Dump trucks have a higher center of gravity than most vehicles.  When a dump truck is empty it is more likely that the rear brakes may lock up or tend to skid, causing a loss of control.  Manuals warn drivers to “avoid sharp lane maneuvers and to drive slowly during turns.  Drivers are advised to more room to stop and time to accelerate.  Manuals caution that a failure to do so could cause an accident involving potential serious injury or loss of life.

Driving a loaded truck comes with other hazards.  Load shifts during turns could cause a loss of control and a possible roll over.  Unevenly distributed loads that are weighted towards the rear can cause situations where the driver is unable to steer particularly on wet, icy, or slippery surfaces, or when braking.  Hard braking can cause the front wheels to lock up increasing the stopping distances.  Driving across uneven terrain with a loaded truck can lead to a truck tipping over.

Driving with a load can increase the height of the center of gravity. The weight will increase the time to accelerate and stop than when empty.  The truck is also more prone to roll over on a curve or during sudden evasive maneuvers.  The driver must adjust the driving to the characteristics of the load by making gradual lane changes, slowly making turns, and allowing for more time and space to merge, accelerate or stop.  Failure to do so can cause an accident leading to serious injury or loss of life.

If you were involved in an accident with a dump truck, an attorney knowledgeable in the applicable driving standards, load limits, and the Federal Motor Carrier Safety Act should evaluate your potential claims.  George Patterson is a member of the Board of Regents of the Academy of Truck Accident Attorneys and is a Board-Certified Truck Accident Attorney by the National Board of Trial Advocacy.  Jack Patterson a licensed class A CDL driver assists with evaluating issues of driver error. Call 301-888-4878 to schedule your free consultation.