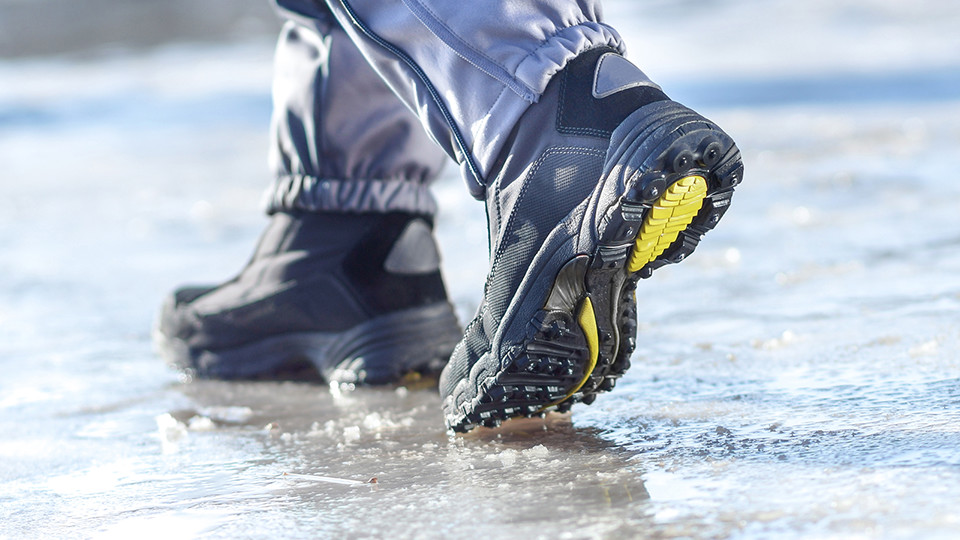 Commercial property managers should be able to anticipate the conditions that will cause black ice and treat the paved surfaces with chemicals or salt.

Maryland lawyers George and Maria Patterson have litigated dozens of injury cases arising from falls on black ice. The term “black ice” is used to describe clear ice that is over a black surface such as a parking lot. Clear ice is often difficult to see and the surface may just appear damp as opposed to icy. Many lawyers refuse to take cases where a person was injured due to falling on ice. Black ice cases have always been met with mixed results in the Maryland courts.

Maryland is a contributory negligence state. That means if you committed a negligent act that contributed to your injuries, you are barred from recovery. In slip and fall cases the argument that the person was not looking where they were walking or failed to see a hazard that was there to be seen is almost always present. Contributory negligence is almost always argued by defense lawyers in cases involving a fall on ice. Even if a business owner or landlord failed to clear black ice from a sidewalk, an injured customer or tenant could still lose their case if a court or jury found that the person was contributorily negligent for walking on ice that they should have seen. The Maryland personal injury lawyers at Patterson Law have successfully guided clients past these tricky defenses.

A plaintiff can also lose a case if the judge or jury believed that the plaintiff did not see the black ice but should have known that the apparently wet looking surface was black ice. In Maryland assumption of the risk is also a defense to personal injury claims for falling on black ice. A person assumes the risk of an injury if they voluntarily encounter a dangerous condition and are injured by that condition. Voluntarily stepping on a sheet of ice qualifies as assuming the risk of slipping on that sheet of ice and falling. Defense lawyers will always attempt to prove that a person who fell on black ice assumed the risk of their injuries. The personal injury lawyers at Patterson Law have successfully defeated claims of assumption of the risk and contributory negligence for clients that have fallen on black ice.

The Maryland Court of Appeals and Court of Special Appeals have issued opinions in cases that establish the legal analysis that trial Courts must follow in slip and fall cases. Prior to October 2011, the law in Maryland was that a person assumed the risk of falling on ice as a matter of law if they had reason to know of the risk of slipping on ice. The required knowledge was not knowledge that ice was actually present. It was the appreciation of the reasonable likelihood that, under the weather conditions and other circumstances, black ice might be present. The assumed risk was found as a matter of law, when one stepped on an unknown surface with awareness that it might be icy. Cloudy ice is easily seen. With black ice or clear ice, one can infer that it might be present. Either established the element of awareness.

The Maryland Court of Appeals overruled this analysis of cases involving falls on ice. The Court identified facts that are present in many cases where a person falls on black ice that a jury could rely on to conclude that the person did not assume the risk of her injuries. For example, the person may have observed that the surface appeared wet but knew from past experience that the land owner usually salted the surface promptly. The person had walked the same path after it had snowed and been cleared with no problems. For example, the temperature may have been above freezing within an hour of the fall rendering a person’s belief that the surface was free of black ice reasonable. The change in the case law permits most cases where a person stepped onto a surface that they believed to be wet but was actually covered by a sheet of invisible ice to present their case to a jury. Prior to these recent decisions, judges would find against a plaintiff before their case reached the jury, if the person knew or should have known that the temperature was below freezing and that the conditions were sufficient that black ice might be present. The defense lawyer only had to prove that the conditions were sufficient for ice to form and the injured party knew or should have known that the conditions for ice to form were present.

Black ice is thin and highly transparent and thus difficult to see as compared with snow, frozen slush, or thicker ice layers. In addition, it often is preceded by wet pavement, which is nearly identical in appearance.

Lawyer George Patterson obtained a $200,000 recovery for a tenant that fell on clear ice while walking on a sidewalk to her car. The apartment complex had offered her $30,000 to resolve her case before the suit was filed. Questioning of the corporate designee of the apartment complex revealed that the defendant knew refreezing of ice at night was a problem and that extra salt needed to be placed in such areas. George Patterson has likewise obtained additional awards of $200,000, $135,000, and $100,000 for people that have fallen on black ice. Each of these clients’ injury claims were rejected by the insurance companies prior to George Patterson filing suit. The personal injury lawyers at Patterson Law have litigated cases involving falls on black ice for over 25 years. The injury lawyers have prevailed in fall cases on black ice when the law was unfavorable to plaintiffs and have continued to prevail in black ice fall cases now that the law is more lenient on those who have fallen on black ice.

I could not have chosen a better attorney, and am extremely pleased with the outcome. please save your time and energy searching for an attorney. He’s the one!

Client That Fell On Black Ice

Most victims of black ice believe that the pavement is merely wet because the property where they fall is usually treated with agents such as salt or chemicals designed to melt or ice or prevent the formation of ice.