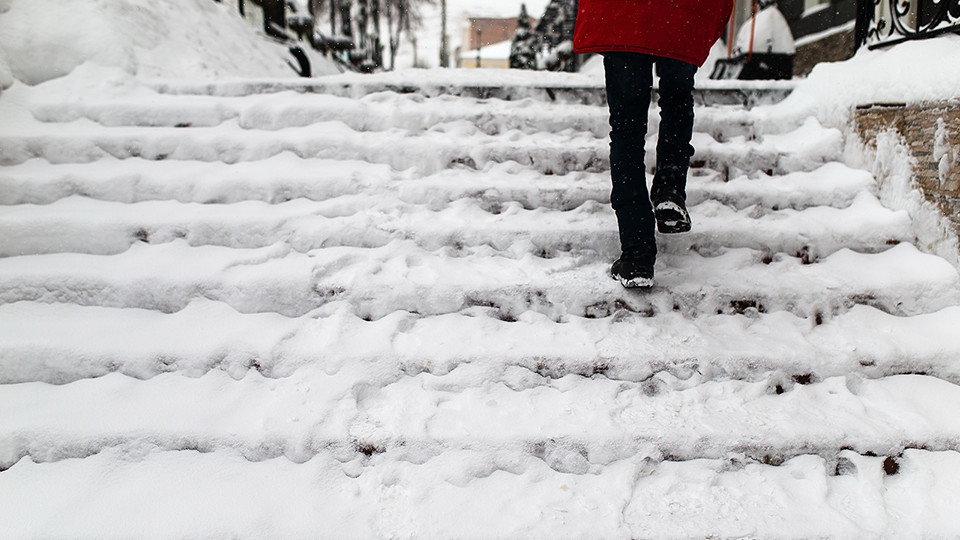 Tenants of office buildings and tenants of apartment complexes observe the snow and ice removal procedures instituted by the landlord. After observing the landlord implement procedures tenants develop an understanding as to when it is safe to walk to or from the building. The landlord almost always will blame the tenant for falling on ice due to a landlord failing to follow their snow removal procedures. The argument is the tenant knew or should have known that the sidewalk, parking lot or road was covered in a layer of clear ice.

The following are examples of lawyer George Patterson’s clients that believed it was safe to walk on what appeared to be wet pavement before they fell and suffered serious injuries:

A nurse arrives to work at a medical office building that treats oncology patients, orthopedic patients and the elderly. The nurse knew that medical tenants require the highest level of snow removal and ice prevention treatments. She rightfully believed that the pavement that appeared wet must have been treated with salt before she fell. The landlord usually followed strict snow removal procedures.

A Tenant that spent one and half days in her apartment after a severe snowstorm to give the landlord sufficient time to complete their snow removal procedures. She heard the contractors using snow blowers and left her apartment. She knew from prior years that the landlord would clear the snow and salt the walkways. She saw what appeared to be wet pavement before she fell.

A tenant that went to his car about 18 hours after a small snow storm stepped on what appeared to be wet pavement and fell. He believed that the landlord had cleared the snow and treated the paved areas as they had always in the past.

In Maryland if you have a reasonable belief that it was safe to walk on wet pavement then you arguably did not assume the risk of stepping on ice and falling.

Lawyer George Patterson represented a tenant that fell on ice at a Gaithersburg Apartment complex. The client had resided at the complex for two years and knew that the landlord would clear and treat the walkways within one day of the snow fall ending. The tenant waited for that time to pass and she fell on an icy sidewalk. The paramedics that arrived documented that the tenant fell on ice.

The landlord and the corporate designee for the complex were deposed. Those depositions revealed that the landlord considered it their duty to place salt on the sidewalks to prevent refreezing as part of their snow removal procedures. Photographs taken after the fall showed that the crews failed to clear an area of snow on a staircase near the area of the fall. An expert in snow removal hired by lawyer George Patterson visited the site and concluded that the snow from this uncleared location melted and then froze over the area that the client fell.

The insurance company faced with the admissions that were obtained in depositions, the expert reports and photographic evidence agreed to settle the case for $200,000. The offer before the suit was filed was $30,000.

The personal injury lawyers at Patterson Law have litigated cases involving falls on ice for the past 20 years. The injury lawyers have prevailed in fall cases on black ice when the law was unfavorable to plaintiffs and have continued to prevail in snow removal cases now that the law is more lenient on those who have fallen on ice.

A landlord may hire a contractor to handle snow removal but the landowner remains legally responsible for failures to properly clear and treat ice.

Prior to this experience, my only knowledge about lawyers was from tv and through others experiences. Needless to say, I was intimidated and uneasy when it came to seeking legal-council. George changed all of that for me. George was extremely professional and made this process as pleasant as possible. He walked me through each step, ahead of time, so that I was properly prepared and informed throughout it all. I could not have chosen a better attorney, and am extremely pleased with the outcome. Please save your time and energy searching for an attorney. He’s the one!

A Client That Fell On Ice.